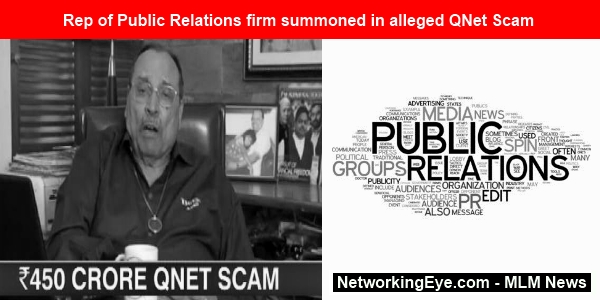 Economic Offences Wing (EOW) Of The Mumbai Police summoned the rep of a Public Relations firm, who is handling  the account of QNet in India. At the same time, EOW authorities have also written to the banks that under section 91 and 102 of CrPC and Section 4 of the Bankers Books Evidence Act, 189, to freeze the PR company’s bank account.

Rajvardhan Sinha, additional commissioner said, “We suspect the money used to pay the PR firm was earned by QNet through the proceeds of crime. Till date, 10 people have been arrested in this case,”.

The cops also stated they will also summon various other Public Relations firms who did PR job for QNet in the past.

According to Mumbai Police, the Public Relations firm PR company had actually become part of an agreement with QNet in January to act as a coordinator between the media as well as the advertising company.

“We have asked the PR firm to furnish the contract copy, details of QNet officials who had approached it and bank payment details,” said an officer. But, the officer added, the EOW is not satisfied and has summoned the representative again.

The alleged Qnet scam is said to be of Rs 425 crore in India.