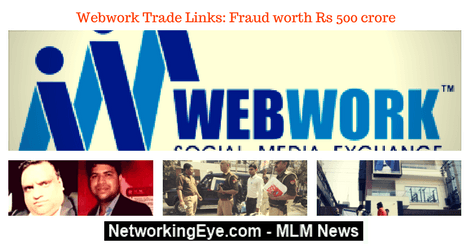 An FIR has been registered against a Noida-based company for allegedly duping people of Rs 500 crore, police said on Monday.

In a similar case, the Uttar Pradesh Police’s Special Task force had on February 2 busted an online trading scam worth over Rs 3,700 crore by Noida-based Ablaze Info Solutions Private Limited in which nearly seven lakh people were duped on the pretext of getting money in lieu of clicking on specific links.

Amit Kishore Jain, a Ghaziabad resident, filed a complaint at Sector 20 police station alleging that the company’s owners duped nearly two lakh people who were promised handsome returns by clicking on web links and made Rs 500 crore in the past four months.

Webwork Trade Links Private Limited is located at D 57, Sector 2 and has shut operations till April 20.

An FIR has been filed based on Jain’s complaint and the UPSTF has started a probe into the matter.

“The company’s directors Anurag Garg and Sudesh Verma offered membership to more than four lakh people in the past four months for the click and earn plan. It is alleged that they collected over Rs 500 crore from around two lakh people,” SP (City) Dinesh Yadav said.

The complainant has alleged that Bollywood actors Shah Rukh Khan and Nawazuddin Siddiqui are brand ambassadors of the firm and have featured in its advertisements.

UPSTF ASP Triveni Singh said, “We have other such companies on our radar and started a probe into this case.”

The company in a notice on its website has said its operations will remain closed until April 20 due to transaction problems.