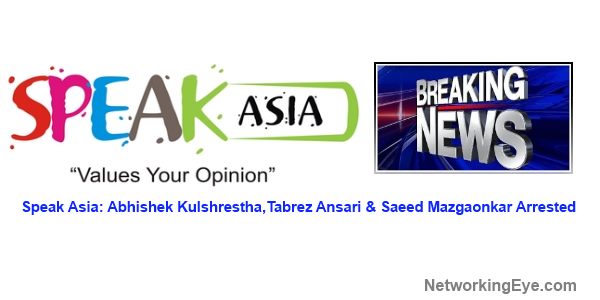 The Mumbai Economic Offences Wing on Tuesday evening detained three persons of  SpeakAsia, in connection with their alleged role, where the company scammed  people in total of Rs 2,276 crore.

The apprehended accused, Abhishek Kulshrestha, an MBA, Tabrez Ansari and Saeed Mazgaonkar, were produced before a court and remanded in police custody till November 4.

“Kulshrestha was in our FIR however it took a very long time to trace him. He dealt with Speak Asia company in between April 2010 and February 2013. He originally comes from Bareili in UP,” said a law enforcement agent.

Ansari and Mazgaonkar are Mumbai citizens, who had actually previously worked with SpeakAsia and later began a fake company with the name,  Status Assocaites, and referred gullible panelists (investors) to SpeakAsia. During the investigation police also found Rs 2.25 crore in their bank accounts. Though the firm stopped working after Might 2010 however, Kulshrestha was still getting his salary.

Till today, 16 persons have been arrested. In 2012, the EOW apprehended Saurabh Singh, an MBA graduate, and Suresh Padhi, a clerk connected to the naval dock, who had accumulated a number of crore from investors and duped them.