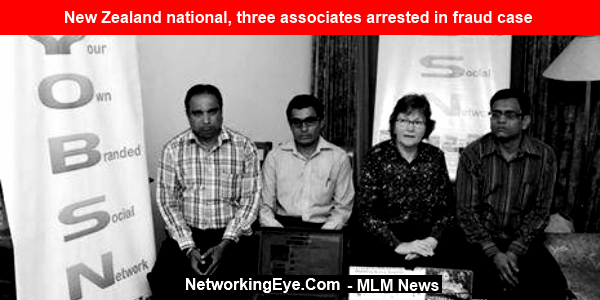 The Central Crime Branch (CCB) sleuths busted a network marketing fraud with the arrest of four persons including a 52-year-old woman from New Zealand for allegedly duping people on the pretext of offering them memberships in a networking company.

Based on a tip-off, a team of sleuths approached the company executives holding a seminar at Hotel Capitol on Rajbhavan Road and arrested the accused.

The accused have been identified as Denise, a New Zealand national who heads the fraud company and her associates Mohammed Khurram (44), Kiran Modi (39) and Hitesh Modi (42) from Bengaluru.

Joint Commissioner of Police, Hemanth Nimbalkar who led the raid, said that the company under the banner “YOBSN SOCIAL MEDIA NETWORK MLM” was being run through a website www.socialmediatechnologies.com. The accused conducted seminars and power point presentations across the country to lure people by offering them money in US dollars.

Police said that anyone could become a member of the network by paying Rs. 8,000 to Rs. 25,000 according to their capacity following which the member will have to introduce two persons (Left & Right member) to invest. The member gets a 25 per cent bonus as commission.

CCB investigated the documents available with the accused persons and found that the accused Denise had introduced more than 31,000 members from across the globe and had collected Rs. 50 crore worth enrolment fee.

Mohammed Khurram also has 2,000 members in his tree and claims to have received $10,000 as commission.

The CCB has filed an FIR against the accused in Cubbon Park Police station and booked them under section 3, 4, 5 of Prize Chits and Money Circulation Scheme (ban) Act and section 420 IPC.

Mr. Nimbalkar said that action would be initiated against the hotel for not informing about the event to the police which amounts to abetting the accused.