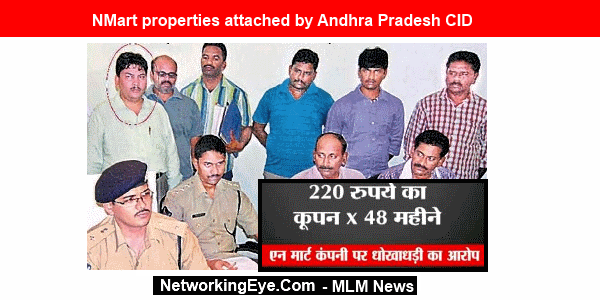 In a fresh move, Surat based mlm company NMart’s properties got attached by the Andhara Pradesh CID. In total, fixed deposits of 2,61 crore and properties worth of Rs. 9.27 crore were attached in the process by the AP, Crime Investigation Department.

It may be recalled that following a complaint lodged by Vijayawada-based Corporate Frauds Watch, the then superintendent of police of Prakasam District Dr Kolli Raghuram Reddy registered a criminal case against the NMart for indulging in illegal money circulation scheme offering huge returns in a short span of time.

The police have also frozen the accounts of NMart at that time. The chairman of NMart, Gopal Singh Shekhawat, was arrested and thrown behind bars. The Prakasam police have also identified the immovable properties belonging to Gopal Shekhawat in Surat and other places after freezing the bank accounts in various banks throughout the country.

The NMart has mobilised deposits from people of various districts in the then undivided State of Andhra Pradesh and all over the country too. After enrolling members into the scheme by collecting Rs. 5,500 per member, the NMart also induced them to enrol more members into the scheme with an incentive of Rs. 200 per member. Subsequently, the case was transferred to the CID for further investigation.

The CID officials attached the properties which would be subsequently auctioned and deposited with the government.