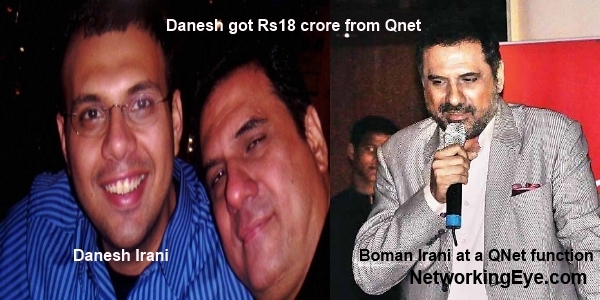 According to the latest revelation, Bollywood actor and comedian Boman Irani’s son Danesh could come under the police scanner after it was revealed that a huge sum of money from the QNet scam was allegedly transferred to his bank account.

QNet is accused of using the banned binary pyramid business model for its multi-level marketing (MLM) schemes to entice investors, commonly known as the ponzi scheme.

Former world billiards champion and Padma Bhushan recipient Michael Ferriera’s name has already cropped up in the investigations. EOW has even issued a Look Out Circular (LOC) against Ferriera after he failed to appear before the police despite being summoned several times.

“Our investigations have revealed that huge sums of money were transferred in the account of Danesh Boman Irani,” additional commissioner of police and EOW chief Rajvardhan Sinha said.

He refused to divulge more details, citing the sensitivity of the case.

“The account is in a Mumbai-based bank. We will soon contact him [Danesh] to get a clear picture… how he is associated with Qnet. We will also ask him about the money deposited in his account,” the officer said.

The company has been under the scanner since April last year after one Gurpreet Singh complained to the police alleging that the company had cheated his wife of nearly Rs31,500.

“Singh had alleged that two members of the company had convinced his wife to become a member and had taken the money from her as membership fee and duped her. The company has over 90,000 members,” said another EOW officer.

“For the last two years, it has been operating through Bengaluru-based Vihaan Direct Market Selling, a franchise of Hong Kong-based company QNet that was indulging in a scheme where existing members are required to bring in more members. To date, the company has made Rs425 crore by selling cosmetic and other products as well as attracting as many members as possible,” Sinha said.

The EOW has arrested nine team leaders of QNet for duping investors by offering to sell products like magnetic disks, herbal products and holiday schemes through fraudulent practices.

The accused have been charged with cheating and forgery under relevant sections of the Prize, Chits and Money Circulation Schemes (Banning) Act 1978.