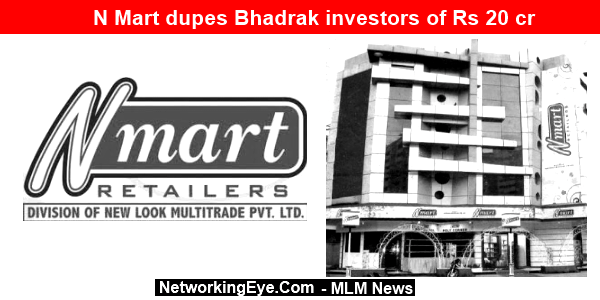 Even as the CBI investigation into 44 chit fund companies in Odisha is on, a fresh case of NMart, another company duping gullible investors has come to light.

While the operations of N Mart Marketing Company are spread over several districts, it is reported to have swindled over Rs 20 crore from the people in Bhadrak district alone.

The company had collected money from the people after luring them to buy products through retail chain marketing system.

As per the system put in place by the company, persons wanting to be a member of the company had to obtain an ID code after depositing Rs 5500. Once they became members, they were promised products worth Rs 220 through the company’s retail counters every month.

The company had also promised hefty commissions to members who roped in more members through the retail chain system.

Besides, it had announced to deliver products worth Rs 10,500 to the members in four years with products of Rs 220 per month in 48 instalments and promised to to pay double the amount (Rs 11,000) to the members after four years.

However, the company, all of a sudden, closed all its retail chain counters in the district leaving its agents in dire straights.

These agents, who had opened their account in the company, are neither able to return the money to the depositors and nor provide them with the products they had booked. Since most of them had roped in their relatives and friends as members, they are now hiding from their customers.

Meanwhile, the police have sealed all the sales and retail counters of the company in the district.

Besides, it has also collected crores of rupees from the people in Soro area of Baleswar and several areas of Jajpur district through the agents.