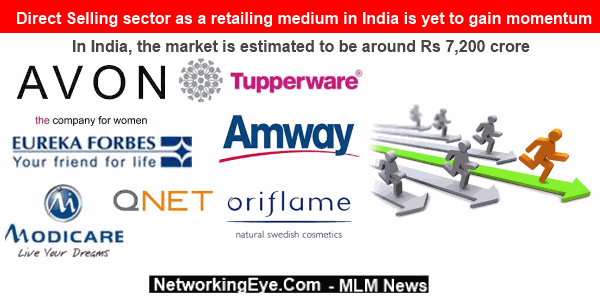 The past history of direct marketing dates back to the days, perhaps, when we used to acquire vegetables as well as family products from the cart vendors. Gradually, the principle as a tool of selling gained approval, yet, the section has actually not attained its best position in the country. A closer Look!

Direct selling is a worldwide market, running in over ONE HUNDRED nations, with a market dimension of USD 167 billion. It describes the selling of products and services to the customers, far from a taken care of retail outlet, normally in their residences, work environment etc, via description and demo of the item by direct sellers.

The USA, Japan and China are key markets for the industry. In India, the market is estimated to be around Rs 7,200 crore, which is a far smaller percentage when compared to other countries, according to a report by FICCI-KPMG.

Commenting on the same, Ravi Saxena, CMD, Wonderchef, said, “The direct selling industry will grow at the rate of 15-20 per cent a month – fuelled by the increasing consumerism and investments being made by the direct selling firms.”

Earlier, direct selling industry used to follow the medium of door-to-door selling, but now the industry is adapting the medium of advertisement to promote their brands.

Saxena added,“Advertisements are to build credibility and awareness in the customer – the selling mechanism still remains the same.”

For example, companies like Amway and Oriflame, have gained their foothold in India by selling their products through direct selling medium, and later, these companies followed the path of advertisements and media participation. Amway was one of the first major global direct selling companies to enter India in the year 1995, which was followed by companies like- Avon, Oriflame and Tupperware in 1996. And these players are still dominating the India market, when it comes to direct selling.

William S Pinckney, MD and CEO, Amway India Enterprises, said, “Amway India established in 1995 recorded a turnover of Rs 2,046 crore for FY 2013-14. We manufacture 30 per cent of our products in India.”

Setting-up manufacturing facilities, dealing with import duties, lack of regulatory clarity etc are some of the daunting challenges that hinder the growth path of direct selling industry in India. Due to this, often, direct selling companies are mistaken for fraudulent pyramid or ‘ponzi schemes’.

Expressing his views on the misinterpretation on direct selling regulations, Keshav Desiraju, Secretary, Consumer Affairs, said, “My Ministry is working towards creating a regulatory framework for the emerging industries like eCommerce and direct selling under our internal trade reforms agenda, through which we can help in distinguishing between the genuine and fraudulent players, and our key concern is to safeguard the interest of consumers.”

He said further, “We are hopeful that the proposed changes to the Consumer Protection Act will strengthen consumer welfare. There is a need to differentiate direct selling from other fraudulent schemes masquerading in the market as direct selling. With internal trade falling under the Ministry of Consumer Affairs, as per the allocation of business, the Ministry seeks to play an important role in regulating activities, which impact on consumers. The industry needs to have a regulator to look at its issues more closely and resolve them.”

In many cases, due to the absence of clarity, representatives of the direct selling companies have been harassed by the local police and state governments. Such incidences tend to hinder the growth of the industry and can have an adverse effect on consumer confidence.

The Indian Direct Selling Association continues to demand the development of a proper legal framework for the channel, although nothing concrete has been established in this respect yet.

Rajat Wahi, Partner, KPMG, said, “The direct selling industry is unique in the number of people it engages directly. No other industry is able to touch so many lives, or is as close to its customers as direct selling. The benefits of the industry have been recognised globally, and it holds large potential in India as well. There is a need to create an enabling environment for the industry to thrive.”

On the same note, Saxena shared, “The companies and government must formulate clear guidelines so that genuine firms are not victimised, as well as non genuine sellers are not able to misuse the trust of customers.”

Clearly, the scope of direct selling as a retailing medium in India is yet to gain momentum.