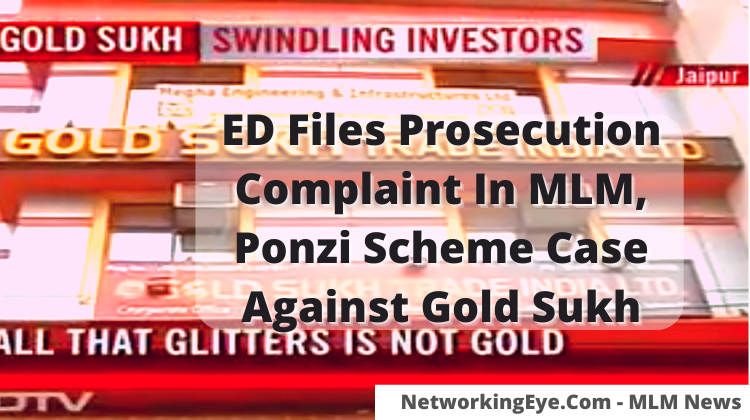 The Enforcement Directorate has filed a prosecution complaint under the Prevention of Money Laundering Act, 2002 (PMLA) before the court of Special Judge (PMLA), Jaipur in an MLM/Network Marketing and Ponzi scheme case.

A company called Gold Sukh has allegedly swindled over 1.75 lakh investors of crores of rupees and shut shop all of a sudden. The company that operated out of Jaipur had promised a 150 per cent increase in investments in 18 months.

The ED took up the investigation under PMLA on the basis of nine FIRs registered by the Vidhyakpuri Police Station, Jaipur against Gold Sukh Trade India Ltd, Jaipur, its Directors, shareholder and team leader for mobilising public deposits during the period from 2008-09 to 2010-11.

The state police have filed charge-sheets and supplementary charge-sheets against the accused persons under the Indian Penal Code (IPC) and Prize Chit and Money Circulation Scheme (Banning) Act, 1978.

During investigation under PMLA, proceeds of crime amounting to Rs 3.06 crore, in the form of movable and immovable properties were attached, which was subsequently confirmed by the Adjudicating Authority (PMLA), New Delhi, the statement added.

The prosecution complaint has been filed on the basis of the outcome of investigation and attachment of proceeds of crime from these persons, found acquired out of offences scheduled to PMLA. Confiscation of attached properties valuing Rs 3.06 crore has also been prayed in the complaint in terms of section 8 (5) of PMLA, 2002 apart from prayer for punishing the accused in terms of section-4 of PMLA.

Further investigation in the matter is in process