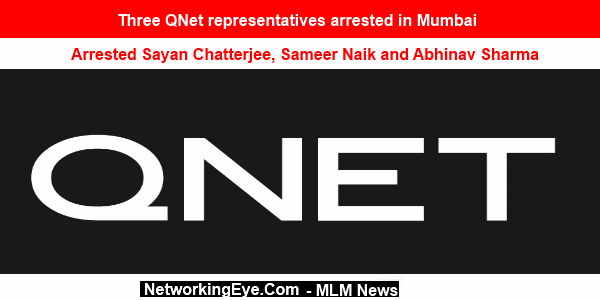 On wednesday, three more representatives of QNet, mlm company allegedly involved in a Rs 425-crore fraud have been arrested from the mumbai city.

“The accused were produced before a court which remanded them in police custody till January 12,” said N Kapase, Inspector (Economic Offences Wing).

While one of them is associated with the controversial company since 2007, the others enrolled with it in 2012, the
officer said.

“The trio pocketed anything between Rs 15 to Rs 60 lakh through different schemes over the years,” Kapase added.

EOW has invoked the stringent Maharashtra Protection of Interest of Depositors (MPID) against the company, which
has denied any wrongdoing on its part.

QNet has also been accused of using the banned binary pyramid business model. An FIR in the case was registered in
August in 2013.

The accused had been charged with cheating and forgery under relevant sections of the Prize, Chits and Money
Circulation Schemes (Banning) Act, 1978.