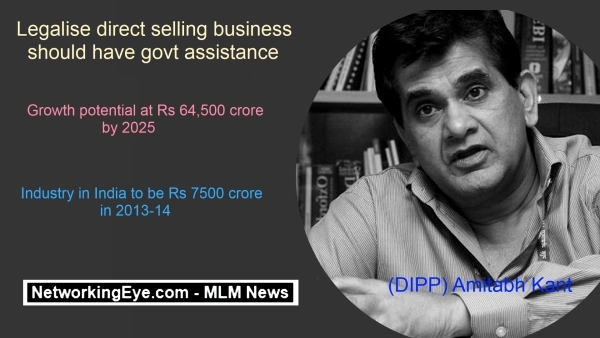 Direct selling should not be equated with fraudulent financial schemes and should gain government recognition and proper legislation, Department of Industrial Policy and Promotion (DIPP) Amitabh Kant said on Tuesday.

Speaking at an event about direct selling – the marketing and selling of products directly to consumers away from a fixed retail location, by industry body Federation of Indian Chambers of Commerce and Industry (Ficci), Kant said the industry had enormous growth potential.

Stressing that it was a public business and not ponzi schemes, a number of  which have recently been uncovered in eastern states, Kant called for increased government supervision and assistance in the industry.

“Government needs to be made literate about issues regarding direct selling”, he said. He added DIPP has already sent the draft guidelines on direct selling to the department of consumer affairs, which is the nodal authority for all legislation on the matter, for state level implementation.

In the absence of a proper legal framework, Kant said local administration like tax officials and police need to be educated more to help direct selling which has produces large scale employment.

A report on the industry by international business advisor and auditor KPMG, released at the event, pointed out the size of the industry in India to be Rs 7500 crore in 2013-14.

Although currently, direct selling accounts for around 0.4 per cent of all retail sales in the country, the report pegged its growth potential at Rs 64,500 crore by 2025.

The market for direct selling managed to grow at an impressive compounded annual rgrowth rate of 16 per cent in the last five years.