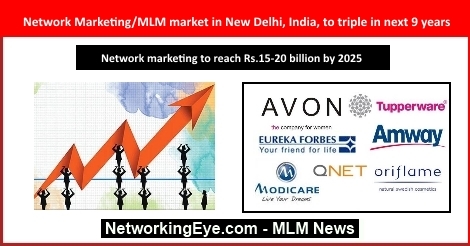 New Delhi, 5 July (Networkingeye): As per the reports from FICCI – KPMG on Tuesday, June 28, 2016, the market size of the Direct Selling/ network marketing Industry in the capital city, New Delhi, has the potential of reaching Rs. 15-20 billion by 2025

The report, titled, ‘Direct Selling: Delhi – A Global Industry, Empowering Millions’ — attributes the growing income of the middle-class households, growth in the consumer markets and an increase in the infiltration of direct selling/ network marketing to globally comparable levels as main reasons for the growth of this industry.

Chandralekha Malviya, Principal Advisor, Ministry for Consumer Affairs, Food and Public Distribution said “We acknowledge the contribution of this industry and we have worked hard on preparing the guidelines for the industry. It is in the final stages of approvals and will be released very soon.”

Besides being the fastest growing, New Delhi has also recorded the double-digit growth of more than 16 percent over the past four years, which has attracted a large number of Indian and foreign direct selling/ network marketing companies.

The report further added that the state has seen a continuous growth in the number of direct sellers/ network marketing in the year 2013-2014. More than 250,000-300,000 direct sellers were estimated to be engaged in the industry and this number is only expected to grow further as the industry expands.

The report added that the direct selling industry/network marketing has also contributed to the overall growth and technology percolation which is mainly due to its sourcing manufacturing capabilities of Small and Medium Enterprises (SMEs) in the state and is directly in line with the Government’s ‘Make in India’ campaign.

Stressing on the growth contributors, the report suggests that the industry has the potential for greater penetration.

A robust gross domestic product (GDP), an increase in the household income that is expected to triple by 2025, rapidly growing urbanization, and overall growth of the industry in key sectors such as health and wellness, cosmetics, household goods, many of which are expected to grow at 10-16 percent, are considered to be the other growth factors of direct selling/ network marketing industry.

The report also emphasized on the series of immediate short terms reforms as well long terms measures that are required for a favorable and sustainable operating environment in India for the companies operating in direct selling/ network marketing industry.

Chief Executive of Vestige Marketing, Anukul Agrawal, said “We are very encouraged to learn from Consumer Affairs Ministry that the guidelines will be issued very soon. Direct selling industry will strictly follow the guidelines.”