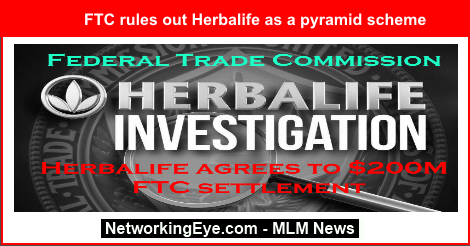 NEW YORK – The U.S. Federal Trade Commission cleared Herbalife, a direct sales nutrition company, of the allegation of being an illegal pyramid scheme.

However, said that the company has been strictly instructed to pay the US$200 million in settlement of complaints made by its consumers of deceiving them over the potential gain of selling their products.

The decision has brought a sigh of relief for Herbalife , which has been facing allegation and accusation from  powerful Wall Street activist investors including Carl Icahn and Bill Ackman. The news has been welcomed by its investors, sending its shares up by 15 percent in morning trading

The investigation by FTC mainly focused on the multi-level structure of the  people buying Herbalife’s products and recruiting further people to redistribute them. This as per the FTC only created a chain of distributors which however was not a clear evidence of any actual retail demand of their products.

Herbalife was charged with tricking consumers into believing that they could make a substantial profit by selling their products in the market.  FTC further charged Herbalife that its compensation structure fundamentally paid its distributors for recruiting more distributors and did not  actually relate to retail demand.

The average amount earned by its distributors in 2014 was under US$300; with the false promise of future earnings of thousands of dollars, each month said FTC.

As per the settlement, Herbalife has been instructed to restructure its compensation plan in such a ways that it rewards actual retails sales of its products to customers.

As per the settlement, Herbalife will pay US$200 which will go to distributors in Herbalife’s “Nutrition Club” who claim to have brought a large volume of products and incurred loss. FTC said that it is a case of misrepresentation. Herbalife also agreed to change some of its business practices and will have to prove that its number for the retail sales are hundred percent precise. According to the company’s statement, its distributors will now be paid based on actual retail sales and not for buying the product for their own private use. Also going forward its distributors will be required to produce actual receipts of retail sales in order to be paid. As per the company, it will now rely on a mobile app which will facilitate in tracking sales and distribution more closely.

Edith Ramirez, FTC Chairwoman said, “Herbalife is going to have to start operating legitimately, making only truthful claims about how much money its members are likely to make.”

However in a statement, Herbalife claimed that many of the FTC’s allegations were “factually incorrect” and said that the terms it agreed to “do not change Herbalife’s business model as a direct selling company.”

Herbalife International is an American direct selling company established in 1980. It mainly develops markets and sells nutritional supplements, weight management, sports nutrition and personal care products. The company’s nutrition, weight management, energy and fitness and personal care products are available solely to and through Independent Herbalife distributors. Currently, it has its global presence in more than 90 countries.