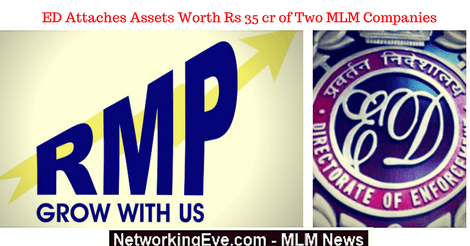 The Enforcement Directorate (ED) has attached assets worth over Rs 35.84 crore of two MLM companies running Ponzi schemes in Chennai and Odisha, an official said.

The move was part of the ED’s crackdown against private companies running Ponzi schemes in different states.

The economic law enforcement agency took the step under the Prevention of Money Laundering Act on Thursday, it said.

Of the total attachment, assets worth Rs 35.55 crore belong to Chennai-based RMP Infotech and of Rs 29.45 lakh to Rajasthan’s Jaipur-based Many Mantra Marketing Private Limited, operating in Odisha.

The official said that RMP Infotech and Many Mantra Marketing have been running their Ponzi schemes business in Chennai and Odisha, respectively.