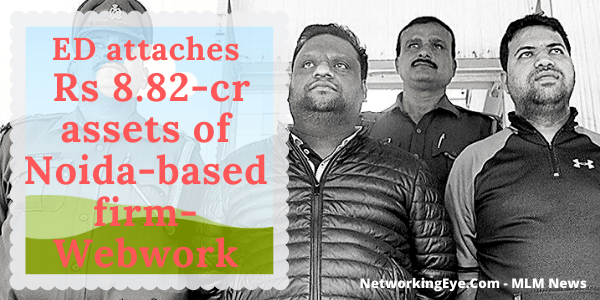 A Noida-based multi-level marketing firm’s assets worth over Rs 8 crore have been attached in connection with an alleged online Ponzi fraud case, the federal agency said on Thursday.

A provisional order under the Prevention of Money Laundering Act (PMLA) has been issued by the Enforcement Directorate against the company– Webwork Trade Link Pvt Ltd.

The case dates back to 2017 when Noida Police had filed an FIR against the firm and its directors Anurag Garg, Sandesh Verma and others for allegedly perpetrating an online fraud and cheating gullible depositors. The ED subsequently took cognisance of this police criminal compliant to file a case under the PMLA.

“The attachment consists of fixed deposits, mutual funds, balances in savings and current accounts of entities who had received money on account of selling the immovable properties and ornaments or providing services but due to the business shutting down and consequent fraud cases against the company, these funds remained with the beneficiaries,” the agency said in a statement.

The total value of the attached assets as part of the latest order is Rs 8.82 crore. “Webwork Trade Links Pvt Ltd, through its online portal, in the name of addsbook.com and web-work.in had been defrauding the public by inducing them to invest in very lucrative investment schemes.

“Investigation revealed that the bank accounts were being opened and closed in succession by the company in many banks like Citi Bank, ICICI Bank, Vijaya Bank, Lakshmi Vilas Bank and Axis Bank,” the ED alleged. In this very short span of time, the agency claimed, the multi-level marketing company diverted large amounts to the accounts of different persons and companies associated with them.

This is the second attachment of assets action by the ED in this case as it has earlier frozen properties worth Rs 27.66 crore. The ED had also filed a chargesheet in this case last year before a special PMLA court in Lucknow and the case is under trial at present, it said. NES NES DPB DPB