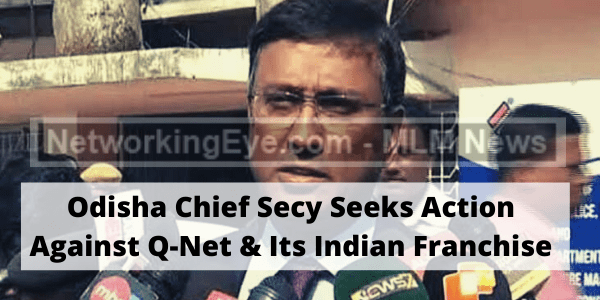 The Office of Odisha Chief Secretary has written to the Economic Offences Wing (EOW) of Crime Branch praying for action against the alleged multi-crore scam by Hong Kong-based company QNet and its Indian partner Vihaan Direct Selling (India) Pvt Ltd.

Acting on a petition filed by one Gyana Ranjan Mishra on November 25, 2019, Chief Secretary Asit Tripathy directed Home and Finance departments to issue an advisory in this regard mentioning that this has already been banned in other States.

The Home department may refer the matter to EOW for action, mentioned the letter.

It was alleged that network marketing company QNet duped several investors of Rs 5,000 crore. Sources said the QNet directors and partners through the Indian franchise –Vihaan Direct Selling (India) Pvt Ltd were engaged in illegal money circulation schemes in the guise of direct selling and multi-level marketing and collected crores of rupees from investors in Odisha. OTV was first to telecast about the scam in its investigative report in September 2019.

EOW has already arrested three senior partners of Vihaan Direct Selling (India) Pvt Ltd– Sarat Parida, Debabrata Harichandan and Chandan Mahalik– all from Bhubaneswar, after preliminary investigation revealed that all three entered into a criminal conspiracy with the directors of QNet and lured people to invest in the scheme promising high returns.

However, EOW reportedly failed to catch hold of the chief of Q-Net.