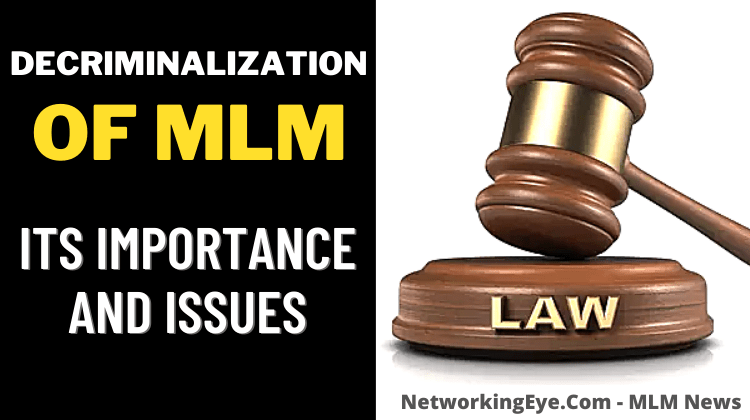 June 8 was an important date for many entrepreneurs because that was the day when the Department of Financial Services issued the new notification with the comments from stakeholders about the decriminalization of several laws and provisions as a result of which many people became interested in it, especially the ones working in the legal or business spheres.

Although most people became interested in the specific act: Negotiable Instruments Act and the decriminalization of the offence of cheque bounce. One more important change mentioned in the notification is the possibility of decriminalization of the schemes of money circulation that can be punished under Sections 4 and 5 of the Prize Chits and Money Circulation Schemes (Banning) Act, 1978 so it leads to the serious step further in the development of the MLM sphere.

It is not difficult for human beings who have some basic knowledge to see the MLM scheme at the first onset. Maybe you know a person who is always very excited about the «Rich Dad Poor Dad» book and suggests it to you all the time, or maybe a person who used to be your classmate suddenly asks you to come for a meeting in a hotel or a special centre and promises that the information that will be given to you will make you understand everything about successful business, or your relative phones you all the time trying to explain that you can spend your money to earn a huge amount of money.

It is obvious that there are people who earned a lot using MLM schemes, but also there are many people who couldn’t earn anything, many of them even lost their money and became really upset. However, even if it is impossible to prove statistically, most people decided not to work with these schemes.

Such MLM pitches can get you into several situations: you can be connected with MLM, or you can be arranged into the direct selling process, or you may be involved in a pyramid scheme. It is proved that a pyramid scheme is a fraud because those who offer you getting in it say that you will only need to pay a little bit for your membership and then say that you will bring your invested money back and earn a lot after recruiting other members who will recruit new members, and so on.

Every big country has strict laws regarding the necessity of punishment for these pyramid schemes. However, it is extremely hard to distinguish where is the standard MLM company and where is a pyramid scheme.

The Prize Chits and Money Circulation Schemes (Banning) Act was created in 1978 in India, so MLM companies in this country have been struggling with the hard end of the law. The law uses a very wide definition of money circulation schemes and it explains them as schemes because of which a person receives money from a new member of the scheme and says he will pay this new member money if he can recruit other members, no matter if the money paid can come from the membership money of these new members or not.

It is obvious that advertising or creating the scheme of such a type is illegal but besides, it is also illegal to be a member of this scheme. If a person offences this law, he may be incarcerated for 3 years.

When the CEO of a very famous MLM company got to prison several years ago as he violated the Act, the Indian Direct Selling Association, which works defending MLM companies, asked to make an amendment to this act. This association was trying to prove that the business of MLM company is based on selling goods.

Such companies are not similar to pyramid schemes because in MLM companies all members can generate profits for themselves and for the members staying in the levels above by selling products, instead of recruiting new members like in pyramid schemes.

Sellers that provide goods from their companies to consumers outside of a retail environment, for example, a store, or a special marketplace can be called «direct sellers». For selling anything they contact customers person-to-person and they will definitely need to find some distributors to develop the business. It is impossible to criminalize the fact of recruiting new members nowadays. The proposal regarding decriminalization was created to develop businesses that suffered a lot because of the slowdown caused by Covid-19 and quarantine.

The only thing that could be more effective for the development of direct selling and MLM than decriminalization is if the act can have modification with the guide to distinguish genuine companies using MLM and pyramid schemes that use people illegally.

The Prize Chits and Money Circulation Schemes (Banning) Act was signed about 40 years ago. During previous decades, India was developing in the corporate law sphere and securities regulations extremely fast which now have useful tools and methods to detect and stop pyramid schemes.

The Standing Committee on Finance of the Lok Sabha created the 21st report in September 2015 where it recommended 2 main steps to support direct sellers and MLM.

The act, in general, doesn’t allow to get any benefit or income for recruiting new members, while that new guideline allows such benefits if they were caused by selling goods.

Simple decriminalization will lead to the fact that people will be vulnerable to pyramid schemes.

Besides, it can worsen the trust deficit situation for people working in this sphere, because they won’t be able to understand what is a direct seller, what is MLM, and what is a pyramid scheme. It is possible to implement all recommendations created by the Standing Committee on Finance and solve the conflict between the Act and the guidelines by creating a new law and elimination of 1978 Act, along with an accreditation system of these schemes, as a result of which businesses will finally develop again and the public interests will be protected as well.