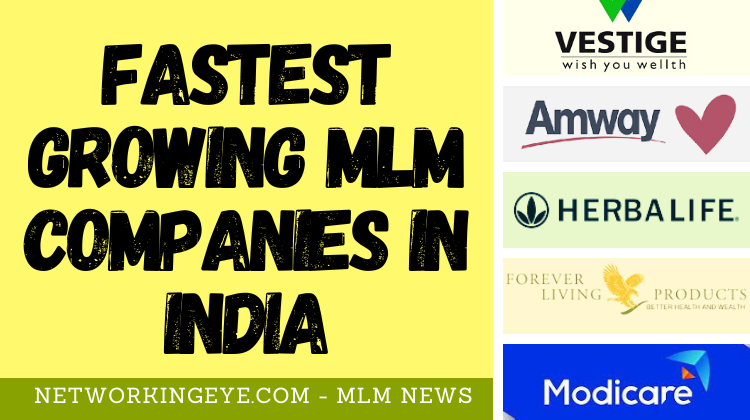 Network marketing is a way to earn extra income in one’s free time, without any prior knowledge or experience. Network marketing, also known as direct selling and multi-level marketing (MLM), is a pyramid-style marketing strategy in which a product is sold by a chain of individuals rather than in a physical store, and these individuals earn commission on the products or services they sell, with higher positions in the company’s pyramid receiving more commission and lower positions receiving less.

It is difficult to determine which MLM company is the fastest growing in India as different sources may have different rankings and criteria for determining growth. However, according to various web search results, some of the fastest-growing MLM companies in India include:

Vestige is an Indian direct-selling company that was founded in 2004. The company offers a range of personal care, home care, and wellness products, as well as a business opportunity for individuals to become independent distributors and sell Vestige products. Vestige has seen significant growth in recent years, with a reported annual turnover of over INR 10,000 crore (over $1.3 billion) in 2020. The company has also expanded its operations globally, with a presence in over 15 countries worldwide. In addition to its financial growth, Vestige has also received various awards and recognition for its products and business practices.

Amway is a well-known MLM business that operates in various industries including health, beauty, and home care. The company was founded in 1959 and has since become one of the largest MLM businesses in the world, with a total turnover of $8.6 billion in 2019. In India, Amway has seen consistent growth and expansion in recent years. The company has launched new products and entered into new markets in the country, and has also invested in various initiatives to support the growth of its independent business owners in India.

Amway, like other MLM companies, has faced criticism and controversy in the past regarding its business practices and potential for financial gain. In the past, Amway has faced legal challenges and regulatory actions in various countries, including India. In 2010, the company was banned in the state of Tamil Nadu in India due to concerns about its business practices. However, the ban was later lifted after Amway agreed to comply with certain regulations. In 2017, the company was also involved in a legal dispute with the Indian government over the classification of its business model. However, the dispute was eventually resolved, and Amway continues to operate in India.

Herbalife is a nutrition and weight management company that was founded in 1980. The company offers a wide range of products including protein shakes, vitamins, and sports nutrition products. In 2019, Herbalife had a total turnover of $4.9 billion. In India, Herbalife has seen strong growth and expansion, with the company reporting double-digit growth in sales in the country in recent years. The company has also expanded its operations in India, with a presence in over 25 states in the country.

Herbalife, like other MLM companies, has faced criticism and controversy in the past regarding its business practices and potential for financial gain. In 2016, the company agreed to pay $200 million to the Federal Trade Commission (FTC) in the United States to settle charges that it operated as an illegal pyramid scheme. The FTC also required Herbalife to restructure its business and implement new policies to ensure that it was operating legally. In India, Herbalife has faced criticism and regulatory scrutiny over its business practices. In 2014, the company was ordered by the Indian Ministry of Consumer Affairs to stop its direct selling activities in the country. However, the order was later overturned by the Delhi High Court, and Herbalife was allowed to continue its operations in India.

Forever Living is a multi-level marketing (MLM) company that was founded in 1978 and has a strong presence in over 160 countries worldwide. In India, the company has been operating for over two decades and has built a reputation for offering high-quality wellness products made from natural ingredients.

Forever Living’s product line in India includes a range of skincare, personal care, and nutritional products, as well as supplements that support overall health and wellness. The company’s products are sold through a network of independent distributors, known as Forever Business Owners (FBOs), who are responsible for promoting and selling the products to consumers.

In addition to its range of wellness products, Forever Living also offers a range of business opportunities for those interested in starting their own home-based business in India. The company provides training and support to help FBOs develop their skills and grow their businesses.

Overall, Forever Living has a strong presence in India and is known for its commitment to natural, high-quality products and empowering individuals to achieve financial freedom through entrepreneurship.

Modicare is a direct-selling company based in India that was founded in 1996. The company offers a range of wellness and personal care products, as well as home and kitchen essentials. Modicare operates using a multi-level marketing (MLM) business model, in which independent distributors, known as Modicare Business Associates (MBAs), are responsible for promoting and selling the company’s products to consumers.

In addition to earning income through retail sales, MBAs can also earn commissions by building their own teams of distributors and by achieving certain performance targets set by the company. Modicare provides training and support to help its MBAs develop their skills and grow their businesses.

Modicare’s product line includes a variety of wellness, personal care, and home essentials, all of which are made from high-quality ingredients. The company is known for its commitment to using natural and Ayurvedic ingredients in its products, and it has a strong focus on sustainability and social responsibility.

Overall, Modicare is a well-respected direct-selling company in India that is known for its commitment to natural ingredients, sustainability, and empowering individuals to achieve financial independence through entrepreneurship.

It’s important to note that the rankings and growth rates of these MLM companies may vary depending on the source and the criteria used to determine growth.

Direct selling firms, also known as multi-level marketing (MLM) companies, can be a legitimate way for individuals to earn income by selling products or services on a part-time or full-time basis. These companies often offer the opportunity to work flexible hours and be your own boss, which can be appealing to many people.

However, direct-selling firms have also been the subject of controversy and criticism in some cases. Some people may have positive experiences with these companies and find them to be a good source of income, while others may have negative experiences and feel that they were misled or taken advantage of.

One potential issue with direct selling firms is that they may rely on the recruitment of new members, rather than primarily selling products or services, to generate income. This can lead to a focus on signing up new members rather than actually selling products and can result in a pyramid-like structure in which the people at the top of the pyramid benefit the most.

It is important to carefully research and consider the specific company and its business practices before deciding to join or invest in a direct selling firm. This can help you to better understand the potential risks and rewards of working with the company.

In conclusion, direct selling firms can be a good way for some people to earn income, but it is important to be aware of the potential risks and challenges associated with these companies. It is always a good idea to thoroughly research any opportunity before getting involved, in order to make an informed decision.

Please share your thoughts in the comments section below if you feel that we have missed any top direct-selling companies in India.