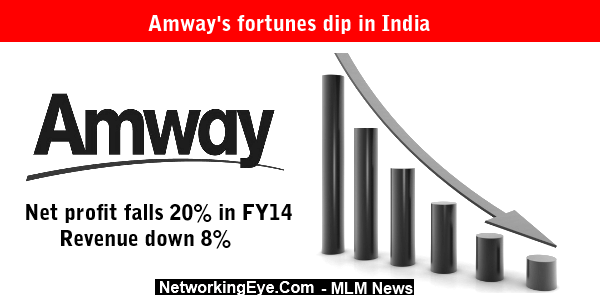 Amid its run-ins with the police over direct-selling model, firm’s net profit falls 20% in FY14, revenue down 8%

Amway, India’s largest direct-selling company, despite an annual drop of 20% in net profit and 8% in turnover in 2013-14, continues to be bigger than fast-moving consumer goods (FMCG) giants like Gillette and Emami in terms of revenue.

This was the first time that Amway’s profit and revenue both declined, even as the market grew. The company’s operations in the country are believed to have been affected by the arrest of its managing director & chief executive, William S Pinckney, under the Prize Chits and Money Circulation Schemes (Banning) Act, 1978 (PCMCS) — first in 2013-14 and then earlier this year.

“The main reason for this decline is that we have faced persistent and increasing challenges due to misconceptions about our business model, as well as the lack of clear rules to distinguish fraud from legitimate direct-selling activities. Much of the confusion about Amway’s business is around our direct-selling model,” Pinckney told Business Standard.

About half the 1.5 million direct distributors Amway operates through are actually consumers who have turned distributors, primarily to buy for themselves at a discount. Amway’s business associates form a substantial alternative distribution chain, as beverage companies alone cover about five million of the country’s close to eight million retail outlets.

Under Amway’s direct-selling model, distributors, who are enrolled for free, earn commissions on sale of products directly to consumers, in addition to a share in business volumes of their group, comprising other downline distributors.

Amway, which started its India operations in 1998, currently has a presence in 80 cities across about 10,000 postal codes. The company has about 145 offices and 65 warehouses. Its competitors include Oriflame, Herbalife, Avon and Modicare. The direct-selling market is estimated at about Rs 7,200 crore, and is projected to grow to about Rs 64,500 crore by 2025, showed a recent joint study by industry body Ficci and global consulting firm KPMG.

When the company have begun its operations in India, it was importing all of its products. Today, almost 90% of its products are made here through contract manufacturing, and it is also setting up its own factory at Nilakottal (near Madurai) with an investment of Rs 500 crore.

Personal care and nutrition & wellness are the largest segments, from which the company gets more than 70% of its revenue, Amway India’s balance sheet shows.

Pinckney also said the company would continue to push for reforms in direct-selling laws and would work with lawmakers to ensure they understood the legitimacy of direct selling and Amway’s business. “We maintain our position that the Prize Chits Act needs to be amended, so that Indian citizens are protected from illegitimate financial frauds offering illusory products, and at the same time legitimate direct sellers are allowed to operate,” he added.

At present, an internal committee of the consumer affairs ministry is working on possible amendments to the regulations and evaluating the need for an independent regulator to oversee the direct-selling industry.

Despite its recent problems, Amway remains bigger in size than Emami, whose revenue in 2013-14 stood at Rs 1,705.08 crore, and Gillette, which reported a revenue of Rs 1,749.79 crore for the year. However, Proctor & Gamble, whose revenue in India was lower than Amway previously, has now crossed the direct-selling giant. It had a turnover of Rs 2,050.94 crore in the country in 2013-14.

Amway India has also tried the services business to leverage its huge distributors network. It is a corporate agent for Max Life Insurance and sells health insurance for Royal Sundaram Alliance through its subsidiary AmSure Insurance Agency Ltd.