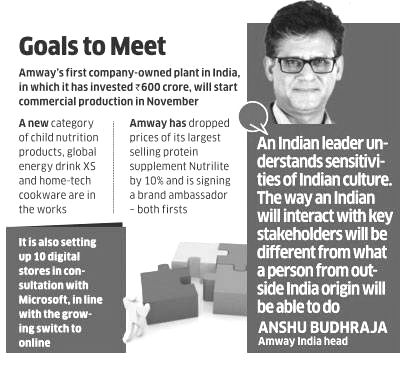 Even after being engulfed in the controversial arrest of its CEO, Amway refuses to give up its promising Indian Market. It has decided to come back even stronger by engaging in constructive participation along with the Indian government. The GDP of India’s direct selling market is around 0.08 per cent, which means that there is a huge potential of growth and once a clear guidelines are made, the Direct Selling Industry has the potential to grow from a current Rs. 7200 Crore to a whooping Rs.64500 crore by 2025. The Indian economy has also seen the raise in the demand of products patterning to wellness, cosmetics and personal care in the last couple of years. Keeping this in view Amway has decided to focus on manufacturing nutrition and cosmetic products in its Chennai based plant. This not only will cut down their import cost but will also reduce the cost of the products to their end customers which could be a good strategy in capturing the untapped Indian market – Networking Eye.

Direct seller Amway India is looking to put behind it controversies stemming from the arrest of its top leadership over allegations related to various irregularities and regain growth momentum while charting out a new phase of engagement with the government.

Anshu Budhraja, the Rs 1,900-crore direct selling firm’s first India head in 16 years, said his immediate priority is to engage with the government constructively and take Amway forward from what he said is a “point of inflexion for the next growth phase.”

Amway has consistently denied any wrongdoing on its part. “An Indian leader understands the sensitivities of Indian culture,” Budhraja said in an interview. “He has the benefit of growing up and being part of system. It’s very simple… the way an Indian will interact with key stakeholders will be different from what a person from outside India will be able to do.”

Budhraja, who has been with the company for about 15 years in roles such as sales and finance, succeeded expat Bill Pinckney, who has relocated to a global role within the $10.8 billion Amway Corp.

“China is a $30-billion direct selling industry, while in India direct selling is just 0.4 per cent of retail sales.That’s one big opportunity to double the numbers… it has a leverage of 10 times,” Budhraja said.

Amway’s first company-owned plant in India, in which it has invested Rs 600 crore, will start commercial production in November.The India unit is looking to service Southeast Asian markets and turning itself into a regional product, innovation and research hub.

“Commodity prices are the lowest in some time now like crude and some other sensitive raw material prices. This is the time to really leverage these. We are reducing dependency on imports,” Budhraja said. Amway’s import content is down to 1-2 per cent from 2025 per cent two years back, he said. The new plant will also make Artistry super premium cosmetics, which are currently being imported. Amway has dropped prices of its largest selling protein supplement Nutrilite by 10 per cent and is signing a brand ambassador both firsts. A new category of child nutrition products, global energy drink XS and home-tech cookware are in the works, he said.

The company is also setting up 10 digital stores in consultation with Microsoft, in line with the growing switch to online. Amway India’s top line contribution to its parent is just 3 per cent, but it’s a top 10 market for the company in terms of growth and is targeting to be in the top three over the next decade. “We are targeting tripling turnover over the next 10 years and investing ahead of the curve,” he said.

The Indian direct selling industry, which includes peers such as Oriflame and Tupperware, is about Rs 7,200 crore. “As the industry and players mature, and as the government’s awareness of the potential and economic and social impact of this industry matures, then you definitely have a playing field which I believe we are getting to,” he said.
On food regulator Food Safety & Standards Authority of India (FSSAI) directing Amway to recall some products two months ago for allegedly selling them without approvals, Budhraja said, “There’s no conflict of interest with the FSSAI. It’s an education process which both of us are helping each other with. For a few products, we are looking at required changes.”

Amway has a portfolio of about 50 products in nutrition, three or four of which have been affected. These are not top growth drivers, it said.

The company has been an active participant in discussions with the government on the model that involves selling directly to consumers through distributors.

“The ministry of consumer affairs has now taken complete ownership of issuing guidelines on direct selling,” Budhraja said.”Amway is making sure the ecosystem has the right facts and has a face who it can go to. That does make a difference. I have personally made it to all meetings we have had with the ministry of consumer affairs. I feel their level of understanding with the Indian piece is much better than what it was earlier.”