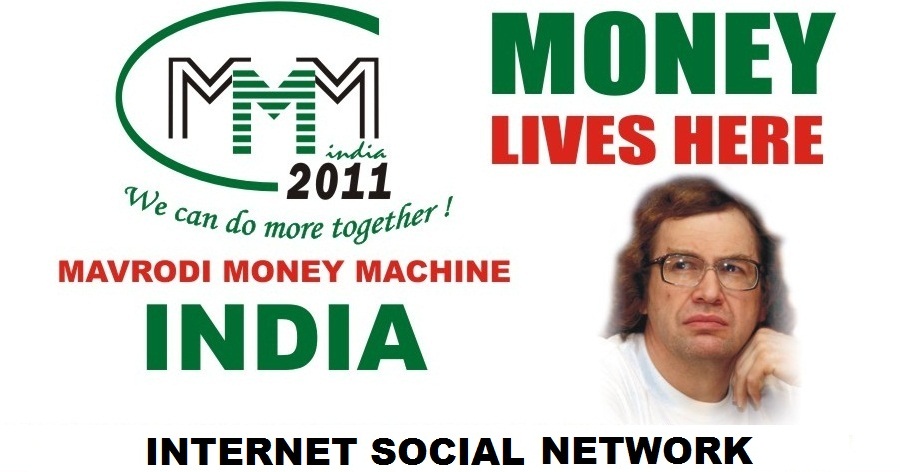 MMM India (Mavrodi Mondial Moneybox) is becoming quite famous for many reasons. Some think, MMM India is going to be the next biggest fraud in India in 2012 and the people, who are working closely with MMM India are very happy with the current progress.

I checked few websites on Google to know more about the background of Sergei Mavrodi. He is the man behind MMM India concept and many other such concepts in the past too.

Originally, MMM was a Russian company in 1990s and got shut down by the Russian government for various reasons. At that point of time, people in Russia lost almost up to $10 billion in MMM business concept.

In 1994, when MMM was in peak in Russia, it reported dividends of 1,000% in a year. After this, lot of people took interest in MMM and started investing. Sergei Mavrodi’s MMM grew very fast through word of mouth advertising.

We all know that the moment one concept is widely accepted in the market then lot of other copy cats too copy the same concept to reap the success and make profit.

Same happened in Russia. Many copy cats started same concepts.  On July 22, 1994, the authorities closed the workplaces of MMM for tax evasion. Many lost their hard earned money in MMM and copy cats too went under ground and some got shut down by the government, like MMM.

This action of Russian government brought lot of uneasiness.

Some investors even committed suicide, as they had invested heavily. When people asked to return their invested money, Sergei Mavrodi, said that he should not be blamed for the collapse of MMM. Its the government, who shut down their operations and the people of Russia, should ask government not him.

Some believe that the Russian authorities during the raid confiscated more than 17 trucks loaded with rubles and they were never reported.

Finally in August 1994 Mavrodi was jailed for tax evasion. Never the less, he was quickly elected to the Russian State Duma, with the assistance of the “scammed investors”.

And then he started few more such concepts but later in 2003 Sergei Mavrodi was arrested.

At the end of April 2007, Mavrodi was pronounced guilty of scams, and given a sentence of 4 and a half years but by then he had already spent that much of time under detention and soon he was released.

Then he went on to start another scheme called MMM-2011. In May 2012 he iced up the operation and announced there would certainly be no more payouts.

In the 2011 he started MMM India and currently this scheme is running successfully. It is believed that by the end of January 2012 there are more than 60,000 – 70,000 people associated with MMM India.

Other copy cats who are working on the same concept are companies like PerDay50.com, helping-hands.us, GinnyBox.com etc.

MMM Operations in Other countries:

Mavrodi pledges to destroy global financial system. Yes, this is what is wants to do.

Financial systems are frauds. They have been looting people, people don’t really understand, how does it work”

lehman brothers global financial services firm was founded in 1850 and it declared bankruptcy in 2008 with debt of $613 billion and it also started worldwide economic meltdown. At that moment governments protected these financial entities by bailing them out with billion of dollars of tax payers money. If these financial entities are looting countries then why are they stopping me. He kept saying that the current financial systems are also pyramid schemes where they have been looting people from ages.

Now the time has come, where we must destabilize such a system and that can be done when we start a parallel system.

At present poor are becoming poorer and rich are becoming richer. The role of government is to tax rich and distribute that money among the poor one but instead of that governments are protecting rich more than ever.

This financial system is like a cancer, if we do not up root it right now then later on it will engulf everything else and will set everything on fire. Act now or repent later on.

Share Trading, Insurance, Banking sector etc., are pyramid schemes at the first place. All are making profits out of think air. If we talk about interest they levy on people, do not even exist at the first place. Its the mind set they created and now everyone is living by that, we do not even question the validity of such a system in 21st century. People have become like fleas in a jar.

Today You Help Someone, Tomorrow You Will  Be Helped Out! – is the tagline of MMM India.

MMM India (Mavrodi Mondial Moneybox) started their operation in 2011 in India. Mavro is the virtual currency they offer to people who ever wants to join. They do not take cash in any form from people, here people who are part MLM India scheme where they buy and sell Marvo with Indian currency by depositing the money to the creditors bank account.

Here is how it works:

MMM India states that it is not an investment plan, it is a give help and get help plan.

Your registration will be cancelled if after buying Marvos you do not make depoits into others bank account. For that the maximum time given by MMM India is 4 days.

You can even refer people to the MMM concept, by referring you get bonus from the company and some stage you even become manager.

Here in more detail about the business plan of MMM India.

The approximate rates at which MAVRO grows are:

How your MAVRO deposits are released:

If you sell MAVRO before release:

The rates of Three months Deposit and Three months Super Profitable Deposit continue to grow after release at the rate of 40% per month compounding interest.

MMM India has  openly declared that

There are no rules. The only rule: no rules at all! Even if you follow the instructions precisely, you can still “lose”. Without any apparent reason or explanation.