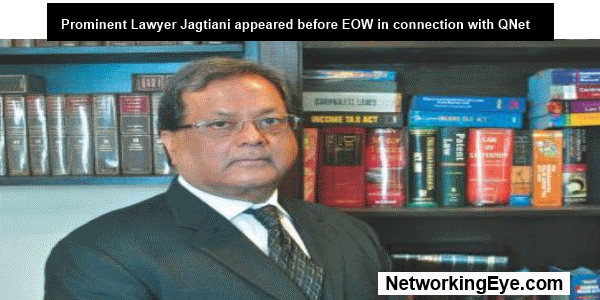 In connection with Qnet probe, Lawyer Haresh Jagtiani appeared before the Mumbai police authority. Jagtiani is famous for his  Bollywood celebrity clientele.

It has come to light that Lawyer Haresh Jagtiani is one of the directors of a travel company called Bonvo Private Ltd, which is a franchise of QNet.

He was asked by the EOW to appear before the investigating officer, where the cops are verifying if he or his business has any kind of role in the recent Qnet controversy.

According to the sources, Jagtiani has submitted some records in his defense prior to the meeting.

QNet has additionally been accused of using the prohibited binary pyramid business model for its direct selling systems, to lure gullible people throughout India.

QNet is implicated by the EOW under cheating and forgery under relevant sections of the Prize, Chits and Money Circulation Schemes (Banning) Act, 1978.

Earlier, EOW questioned Ferreira in connection with the QNet case, though QNET founder Vijay Eswaran and 3 business partners are yet to appear before the EOW.