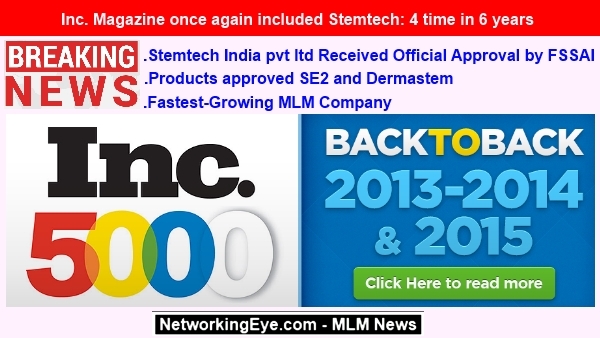 Inc. Magazine has once again included Stemtech International. Inc. on its List of the Fastest-Growing Private Companies in America. Stemtech has now appeared on this prestigious List three years in a row and a fourth time in six years, a feat unmatched by any other company in the direct selling industry. Achieving this coveted accolade even once is much sought-after verification of a company’s consistent growth and a signal to entrepreneurs and the public in general that a listed company has a solid future. Inc. Magazine pointed out that Stemtech’s repeated achievement is especially significant “in the difficult economic environment of the past few years.”

In a message distributed to the members of his international corporate staff and the tens of thousands of global Independent Business Partners in nearly fifty countries, Stemtech Co-Founder, President and CEO Ray C. Carter, Jr., congratulated everyone for this achievement. Carter said, “It is your dedication and hard work that have propelled Stemtech to this recognition by Inc. Magazine. We did it again, four times in the last six years and three years in a row!” adding, “Making the List is even more impressive this year, given the major office relocations we had to handle in 2014.” This reference was to the company’s move of its corporate headquarters and warehouse facilities in spring 2014 from San Clemente, CA, to much larger facilities Pembroke Pines, FL, to accommodate future growth, as well as the concurrent office and warehouse relocations in a number of the company’s international operations.

Stemtech Senior Vice President of Global Markets Jonathan Lester pointed out the company’s key strategic initiative of global expansion early on, which is largely responsible for the company’s consistent growth. Lester commented, “We began our international development in 2007 and our pace continues unabated. In 2014, the company managed to open six new countries, and we are on track to open a record-breaking 15 countries in 2015.”

Stemtech International, Inc. offers Innovation, Wellness and Prosperity in the global marketplace with a patented and patent-protected line of all-natural nutritional products that can be purchased only from Stemtech Independent Business Partners. Go to www.stemtech.com to learn more about The Stem Cell Nutrition Company® and its products, scientific research, published clinical studies, patents and entrepreneurial opportunity.

Now it is official that Stemtech India got official approval from FSSAI. The approval has been given to SE2 and Dermastem. Now these products will be available in India through network marketing/mlm/direct sale.

Stemtech is a leading company on Stem Cell Nutrition.

If you wish to know more about Stemtech India, check this link : http://stemtechindialaunch.blogspot.in