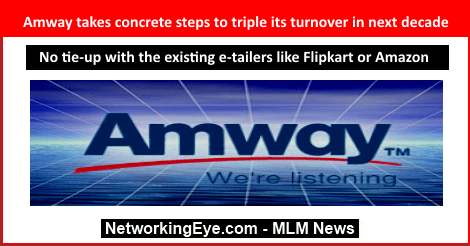 DELHI : One of the leading and oldest  FMCG direct selling company ,Amway plans to add new product lines especially targeted for Indian customers in 2016 . This will likely result in a double-digit growth in FY17 in cookware, health, nutrition and skin care segments showing India’s importance for the parent as per the reports from Edelweiss.

The report also said that Amway plans to triple its turnover by 2025.

Currently in terms of growth rate India is considered amongst the top four markets. This new strategy is expected to figure India amongst the top three in the coming five years. The market growth in Japan for Amway has been at 2% and Korea at 5%. Other global markets like Brazil, Malaysia, Mexico and some pockets in the US have shown good double-digit growth whereas market in Thailand has been flat.

As per the report Nutrilite, which constitutes 50% of the company’s turnover in India, has recently taken Farhan Akhtar as their brand ambassador.  The report also stated that the company has also set aside INR 1 billion for setting up 10 to 12 experience stores. These stores are said to be in partnership with Microsoft and will be utilized to showcase its range of products to distributors, business partners and customers.

Beside this Amway also has e-commerce presence through its existing website and is said to contribute about 30-35% of the total Indian sales. The company also aims to take this number to 55% in next ten years. In the other global markets like the US and South Korea, the company’s online sale constitutes about 70 -80% of sales and the company is setting these countries as their benchmark.

Further the company also has plans to launch an app in coming months and has no plans to tie-up with the existing e-tailers like Flipkart or Amazon and plans to remain a B2B player said the report.

The company is committed to manufacturing all its products locally following the Government’s “Make in India” campaign in India and has also set up its manufacturing facility in Tamil Nadu.

The report also confirmed that it currently has five million independent agents and it plans to increase this number to 18 million in the coming next ten years.

Amway, earlier known as The American Way, is an American company founded in 1959 by Jay Van Andel and Richard DeVos. It uses a multi-level marketing model to sell its products. Its product lines include home care products, personal care products, jewelry, electronics, Nutrilite dietary supplements, water purifiers, air purifiers,  insurance, and cosmetics. Amway has its global presence in more than hundred countries around the world.In 2012 Amway ranked No.26 amongst the largest private companies in the US by Forbes.