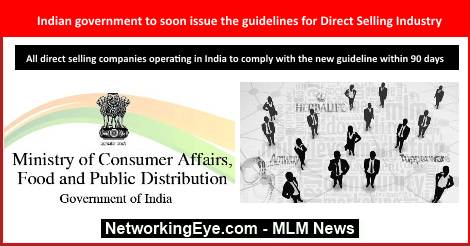 NEW DELHI: Guidelines prepared by the consumer affairs ministry to regulate the sector reveal that Direct selling companies like Amway, Oriflame and Tupperware will be barred from levying  any entry fee on their agents or pressing them to buy back unsold inventory as per TOI.

The companies will also have to guarantee a full refund or buy back products and services sold to their independent representative. This will safeguard thousands of housewives and professionals who work part-time as agents.

The policy is expected to help end the ambiguity between a direct selling firm and a “pyramid scheme.”A typical pyramid scheme is a business model which encourages recruitment of members with the promise of commission for enrolling others into the scheme without any actual sale of products or services.

The direct selling industry has been urging the Indian Government to amend the existing Price Chit and Money Circulation Schemes (Banning Act) 1978 and to come up with a clear legislation that will differentiate them from “pyramid” schemes. According to the industry , “pyramid schemes” companies  are  not registered with the  local authoritarian bodies in the country they operate in, neither do they obtain the license under existing laws of the land, unlike the direct selling companies.

According to a report by ICRIER (Indian Council for Research on International Economic Relations) between 2004 and 2009, the direct sellers in India have almost doubled. The report also stated that in 2009-10,India ranked 11th among the top direct selling countries.

Currently, individuals who wish to become agents or independent representatives with a direct selling company have to pay a certain amount towards their registration as agents, as well as, buy some products for selling. The agents are expected to buy back the products in scenarios where they fail to sell them which puts an extra burden on them.

The new guidelines are expected to be rolled out soon and the states will be asked to implement them swiftly. All direct selling companies operating in India will have to comply with the norms within three months post the issue of the new guidelines which will also include mandatory registration with state government agencies. As per this proposed guidelines, direct sellers can only be engaged through a “legal contract.”

As per the sources, the new guidelines will also specify the cooling period during which both the parties, i.e. a direct selling company and the agent, can request to cancel the contract and claim a refund. It is also expected that the companies will not resort to any form of misleading advertisement to attract consumers.

As stated by an official, “the policy will take care of direct selling agents and consumers as well, which will include the manner in which companies operate and agents approach the consumers.”