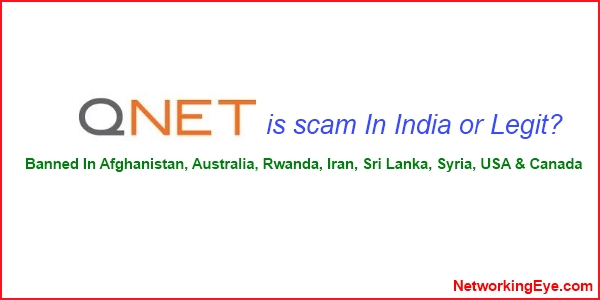 From the past 2-3 years, a lot of my friends have asked about QNet and they want to know in detail. They want to know, whether it is a legitimate business in India or is it a scam. And the people who are asking them to join their QNet group, the minimum capital required to start the business is 1,20,000 INR, whereas I have heard that one could start with 30,000 INR as well. On contrary to that, on the company’s website, anyone can join free of cost.

QNet is known with many names, such as QNet ltd, or QuestNet or GoldQuest or Qi limited. Over the years they changed their product line with new company names, so that when you search about the company on search engines, then you won’t get much information on previous names but only about QNet.

QNet was first started in 1998 with the name GoldQuest and made numismatic coins, but later changed the name to QNet, when they faced accusation of being a pyramid and a money circulation scheme in India and also at other countries.

Vijay Eswaran, Qnet’s executive director, has faced arrest for fraud on an Interpol warrant in May 2007. Where later on, he was freed.

MATTERS FALLING UNDER THE JURISDICTION OF OTHER MINISTRIES I
DEPARTMENTS.
During the course of Inspection, it is found that the above-said company is running a
multi-level marketing or product-based pyramid scheme business. This is a new version
of the pyramid scheme in which the consumers are turned into distributors and the
promoters are able to sell far more products by selling to distributors than they would be
• selling directly to the consumers. The philosophy goes that it is easier to buy than to sell. If
a person can be convinced that he will make money by buying products to qualify for
commissions from sales by those he has recruited, the sale is an easy one. The products
in these schemes have become merely a means of disguising or laundering investments
in the pyramid schemes while the dynamics of the chain promotion. the system is essentially
the same. In fact, money from sales must go through the company’s infrastructure, and only
a portion of the payout is rebated to participants. But must of it goes to top-level Independent
Representatives (IRs) and rest of the amount is spread amongst tens of thousands of
e participants, most of whom loss money

From time to time, QNet got banned in many counties, such as:

It is difficult to distinguish between a legal and a fraud company. Unless MLM law is passed in India, it would be difficult to get the real picture. Same is the case with Qnet. They are already facing legal challenges in India.

For reference, please check the links given below and then decide, if you want to put your hard-earned money with QNet business or not.


QNet has been banned in almost 10-15 countries for various reasons. Some of the reasons were inferiour quality of the products, over rated products, while in some countries like Nepal all Direct Selling/MLM companies are banned, but mostly because it was considered to be a pyramid scheme and looked almost like the money circulating ponzi schemes.

However, it is still opetating in some European countries.

✔️ Is QNET banned in India?

There is no straight way to answer this question. Inorder to understand QNet’s position in India we need to understand a bit of its background. QNet operation started in India through their franchise called Vihaan Direct Selling (India) Pvt Ltd and that time the laws on MLM were not clear. Mostly direct selling are laws are governed by the State Government and not by the Central Government. However, this menance of so called ponzi scheme reached to a boiling point where in the Central Government had issued guidelines for the Direct Selling Industry in India. Apart from this, recently many State Government have also taken proactive steps by enacting Direct Selling Guidelines and Laws.

Over the years Qnet has been the center of many controversies, the most damaging being the alligation by Gurupreet Singh Anand.

✔️ How do I get my money back from QNET?

You can also find their International Toll Free numbers by visiting their website https://www.qnet.net/en/help_centre/support/

In case you don’t get a refund than file an FIR against the company with all the above documents and proofs. This process at last might help you to get invested money back from Qnet.

✔️ Is QNET registered with IDSA?

Indian Direct Selling Association (IDSA) is an independent, self-regulatory body for the direct selling industry in India.
Currently , it has 21 members in India. QNet is not in the list of members.

You can visit their website https://idsa.co.in/ordinary-members to learn more about the idsa members.

✔️ Is QNET safe to invest?

First, you need to check the legal status of Qnet in your country. If it is operating under the guidelines of the direct selling industry and has not faced any legal hurdle then you can get started. Whereas in India, I think you should stay away from Qnet at the moment.