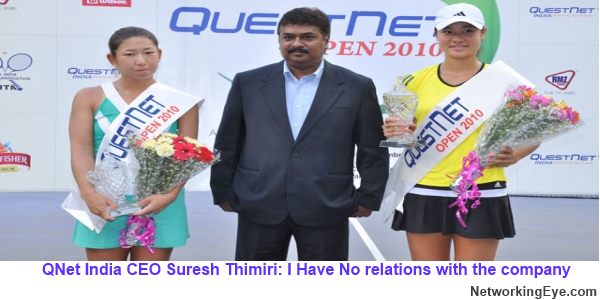 QNet India’s CEO Suresh Thimiri, in his anticipatory bail application has denied any relations with the MLM company and its representatives!

The case of QNet, the Hong Kong-based controversial multi-level marketing (MLM) operator is taking various twists every day; but this one will shock its tens of thousands zealous subscribers and distributors as well.  Suresh Thimiri, QNet India’s chief executive, in his anticipatory bail application has denied any relationship with QNet or any of its representatives.

Thimiri, in his anticipatory bail application filed on 19 August 2013, before additional session Judge DA Dholkia has said, “The applicant (Thimiri) does not hold any sort of relation neither with the Company (QNet) nor its representative (including Eswaran) against whom the Complaint has been lodged by the respondents (Gurupreet Singh Anand) in Oshiwara Police Station.” (See image below)

Interestingly, the same Thimiri is often seen hobnobbing with QNet’s ‘sales force’ or independent representatives (IRs) as well as celebrities like Sri Lankan cricketer Muttiah Muralitharan as recently as in April 2013. One simple question, to the legendary cricketer. Why he is not promoting QNet in his home country? Is this because, Sri Lanka has particularly banned QNet in its previous avatar? (See image below)

Even, Thimiri’s profile on LinkedIn shows him as chief executive of Transview Enterprises (QNet) (). Transview Enterprises Pvt Ltd is an associate company of Vihaan Direct Selling India Pvt Ltd that handles QNet’s MLM operations in India since 14 April 2012. Before that QNet’s Indian operations were controlled by QuestNet Enterprises (India) Pvt Ltd a company registered at Chennai. QuestNet Enterprises was operating QNEI eStore, a platform from where IRs, which is how the investor-dealers of QNet are described, could place orders or buy products and also enrol new recruits. After launching Vihaan, the company asked all its old IRs to mandatorily register under the new business name in order to receive their commissions. Vihaan is a direct selling agent of QNet and had done large financial transactions with Thimiri’s company Transview.

Coming back to Thimiri’s submission in the Sessions Court, this may appear strange for those who do not have much knowledge of a typical MLM company and its operations. Most MLM companies tell distributors or IRs not to make claims for the products except for those found in company literature. (That way the company can deny responsibility for what distributors do.) However, many companies, including QNet and Amway hold sales meetings at which people are encouraged to tell their story to the others in attendance.

Last year, senior Amway representatives Richard N Holwill and Rajat Banerjee, who met us, admitted that although some distributors tend to go overboard in pitching the scheme, income from being a distributor of Amway can, at best, be a source of additional income or pocket money for most people. It is not the pathway to riches as MLM companies make it out to be.

Another modus operandi that is used by the top guns of MLMs is either they deny any association with the company and claim that they themselves are victims of this fraud! Reportedly, few years back police registered a complaint against a female IR (who has now become diamond in QNet) for fraud and cheating. The lady walked away from the case by claiming that she herself was a victim of this fraud. One wonders, why then the lady did not file similar complaint against the company? But this is how these MLMers operate.

In case you are still wondering why Thimiri is not filing a complaint against QNet for using his name as CEO, here is an eye opener from the Hong Kong High Court. Hong Kong-based Kurt George Rocco Rinck, who was one of the founder-director of QI group, the parent of QNet, GoldQuest and QuestNet had filed the case. Although his case was dismissed on ground that he had signed a trust agreement and thus was liable to pay money to QuestNet, here is what Justice John Saunders had stated…
2.  The particular business run by QuestNet made it necessary for various of QuestNet’s directors to establish in their personal names, to be used as what were described as “buffer accounts”, bank accounts in which funds were held, to be available to QuestNet, to avoid potential problems which may arise should QuestNet’s own bank accounts be frozen.
3.  In order to establish one of these buffer accounts, on 18 November 2003, Mr Rinck made a declaration of trust in favour of QuestNet in which he declared that he held all moneys in certain accounts with Citibank in Hong Kong, namely accounts numbered 12330345, 12330353, 82346968, 19356439, 39052036 and 29342899, (the Citibank accounts), which accounts were in his personal name, and that he held:
“all money which may be accrued to or deposited into the aforesaid account from time to time on trust for the absolute benefit of (QuestNet) until such time as those money are withdrawn, transfer or in whatever way he taken out from the aforesaid account according to the instruction of (QuestNet).” (sic)
4.  By a subsequent similar declaration of trust, dated 13 December 2005, Mr Rinck reiterated the declaration of trust that he had made in relation to the Citibank accounts, and further declared that he held all money in account number 800777 (under Identification #800777 SAWTSCHENKO) with Dominick Co Bank in Zurich, Switzerland upon trust for the absolute benefit of QuestNet.  In these proceedings the funds in the various accounts, as at 30 June 2006, have been referred to as the Trust Funds.
5.  A dispute arose between Mr Rinck and QuestNet around late June or early July 2006, as a result of which QuestNet took steps to remove Mr Rinck from his positions as an employee and director of the company.  Mr Rinck disputes that those steps have been effective.
Coming back to Thimiri, the Sessions Court has granted him interim bail on execution of personal recognizance (PR) Bond of Rs25,000 with one or two sureties of the same amount, while directing him to be present before the investigating officer as and when required.

We sent an email to the PR agency of QNet India. The agency told us over phone, that QNet India does not want to provide any information, including names and designations of its top executives at this stage and may issue a statement once the investigations get over.