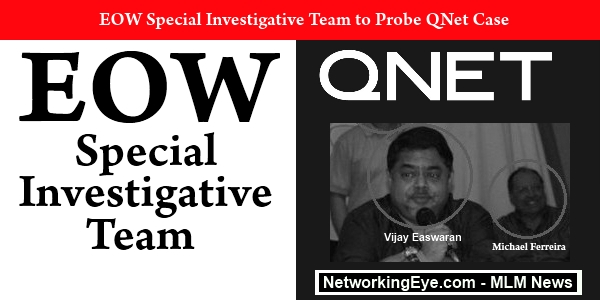 1 / 5 ( 1 vote )
To give pace to the alleged 425 crore Qnet scam, the Economic Offences Wing (EOW) of Mumbai Police has set up a Special Investigation Team.

The EOW is additionally checking out strict lawful options, which will make it mandatory for the suspects concealing abroad to show up before investigators in Mumbai, authorities claimed.

A EOW police officer also said”Special Investigation Team would be formed to speed up the investigation, which is moving at a snail’s pace due the pile of other important cases”.

In this regard earlier, the Economic Offences Wing (EOW) had issued notices against QNET founder Vijay Eswaran.

Some of the suspects are currently abroad, in order to take the probe to the reasonable conclusion, we need their declarations, the officer said.

The EOW had apprehended some high ranking people of Qnet, including Susan Chatterjee, who is the ex-daughter-in-law of the former billiard champion Michael Ferreira, for presumably duping gullible people.

Bollywood actor Boman Irani’s son Danesh was likewise found to be linked with the alleged Qnet scam, adhering to which police froze his Rs 25 lakh.

Ferreira’s statement has been recorded a few weeks ago by police for his alleged role as part of the investigation.