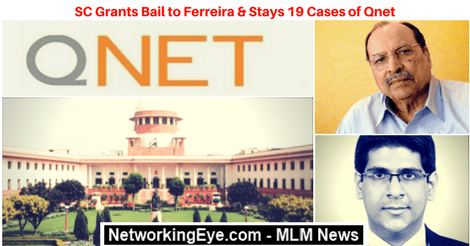 The decision of the Supreme Court brings a relief to Qnet as the Supreme Court passed a stay order in all the 19 FIRs against the direct Selling Company QNet. The court has also granted bail to former world billiards champion Micheal Ferreira and along with another official of firm’s Indian Franchise in the cheating case.

The two officials of the Vihaan Pvt Ltd, Micheal Ferreira and Malckolm Noser Desai were alleged of running a Ponzi scheme and violating the laws of India and were arrested six months ago.

Justices Pinaki Chandra Ghose and Rohinton Fali Nariman, who consisted of the bench, said that there shall be a stay of further proceedings in all the 19 FIRs on basis of the grounds stated in the petition of the duo.

After the Supreme Court has refused them anticipatory bail in September 2016, they had surrendered themselves before a trial court in Mumbai.

The bench granted them relief stating, “Having regard to the fact that the petitioner 2 and 3 before us viz., Michael Joseph Ferriera and Malckolm Nozer Desai are detained in jail custody for about 6 months, they are directed to be released on bail, subject to certain conditions.”

They have been directed to provide bail bonds of Rs.25, 000 each along with two sureties of the same amount to the contentment of the trial court concerned.

They are also required to deposit their passport to the trial court and cooperate with the investigation.

QNet in Mumbai has issued a statement, that the petition challenged that the business model of Vihaan Direct Selling (India) Pvt Ltd is not a money circulation scheme as alleged. Hence, it does not fall under the scope of the Prize Chits and Money Circulation (Banning) Act, 1978.

The company further added that it has also been argued that Vihan’s business was in accordance with all the legal requirements of doing business in India.

Chief Legal Officer of QNet, Raj Vasudevan said “This order is a vindication we have been seeking for more than 3 long years.

“It has come at a very apt time when the government is trying to instil confidence in this industry with the introduction of Model Direct Selling Guidelines.”