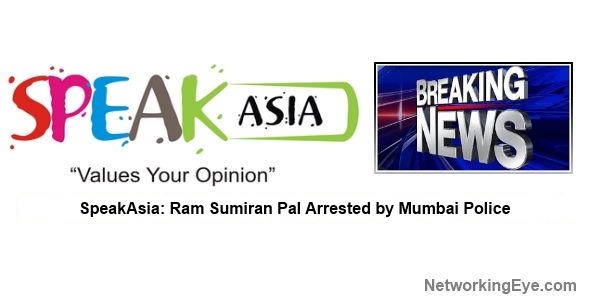 One more high-profile arrest happened in relation to Speak Asia case. Ram Sumiran Pal got arrested by Mumbai police, he was a part of the SpeakAsia administration team.

Till now 8 FIRs have actually been registered throughout India including Maharashtra, Andhra Pradesh, Madhya Pradesh, Uttar Pradesh by the Enforcement Directorate. Soon more arrest are likely to happen.

Till date the Mumbai Economic Offences Wing (EOW)  froze more than 210 savings account having over Rs 142 crore and another 150 bank accounts are under probe.

The Mumbai EOW has actually found trail of over Rs 750 crore being transferred around numerous nations like Singapore, Dubai, Italy, UK, Brazil and so on. The ED has actually located a trail of concerning Rs 900 crore to various other countries.

Teams have been sent out to Shahjahanpur in UP and Karnataka for likely hide of Ram Niwas Pal. Manoj is believed to be in Singapore. The lawsuit and writs associated with SpeakAsia fraudulence have actually been filed in the Supreme Court and the Bombay High Court. The Mumbai Police has actually called the arrest as a valued catch.

Ram Sumiran Pal went to Malaysia twice while on the run. As he was afraid of apprehension at the airport, he took a land route to Kathmandu in Nepal. He took an air travel from Kathmandu to Malaysia on both times and the same route while returning home.

Ram Sumiran Pal got caught when he was going to Delhi to sell one of his properties.