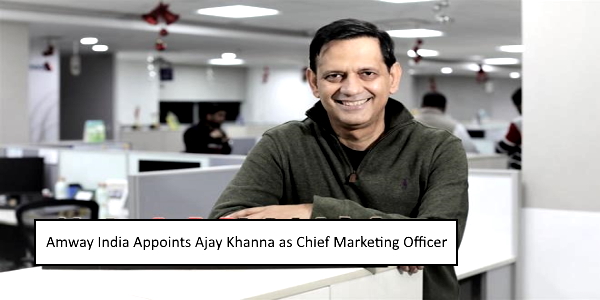 Khanna has taken over the reins from Sundip Shah and will will report to Anshu Budhraja. Ajay Khanna joined the organisation in 1998 and donned many hats in various capacities

Direct selling FMCG company Amway India has appointed Ajay Khanna as the chief marketing officer. With over 24 years of experience in the FMCG and Telecom industry, Khanna has taken over the reins from Sundip Shah, former CMO, who will embark upon an entrepreneurial journey after spending nearly three decades in the corporate world. Based in Amway India’s headquarters in Gurugram, Ajay Khanna will report to Anshu Budhraja, CEO, Amway India.

According to Ajay Khanna, chief marketing officer, Amway India, India is a top priority market for Amway globally. “The evolving market dynamics, along with our differentiated sales channel, makes it an opportune time to introduce innovations for business growth. I look forward to further building the growth momentum created by my predecessor Sundip Shah and taking the business to greater heights,” he added.

An Amway veteran, Ajay Khanna joined the organisation in 1998 and donned many hats in various capacities. His trajectory with the company includes leading growth of the home-care/personal care, agriculture and insurance categories before taking on the category head role for the company’s biggest business category – nutrition and wellness in 2014. Armed with a deep understanding of India’s direct selling industry as well as the dynamic consumer landscape, Khanna has been instrumental in driving growth for Amway’s nutrition brand– Nutrilite, and consumer durables in addition to driving effective collaborations with the company’s direct sellers and cross-functional teams. Under his leadership, Amway team has engineered many successes such as the Nutrilite campaign with a brand ambassador, the best in class Amway Queen (cookware) launch, successful foray into Herbals through the Nutrilite Traditional Herbs range as well as into the consumer durables segment.