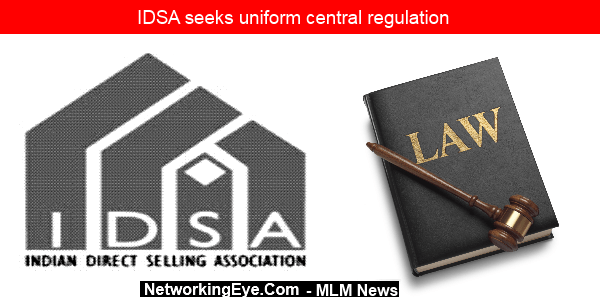 Today IDSA highlighted the demand for a Central Government-driven uniform structure to control the Rs. 7,500-crore market, which is now going through tough times as a result of different line of thinking in some states against the direct selling sector.

The industry, which closed last financial year with business volume of Rs. 7,472 crore, up from Rs. 7,184 crore in 2012-13 and Rs. 6,385 crore in 2011-12, has potential to grow at a much faster pace provided there is consistency in the regulatory norms across the country, Chavi Hemanth, Secretary General, IDSA, said.

Chavi Hemanth said the Ministry of Consumer Affairs, Government of India has constituted an inter-ministerial group on December 8 to look into the regulatory issues concerning the direct selling industry. “We expect the Ministry would come out with appropriate regulations for the industry which was affected in some States taking tough stand,” she said.

Outlining the sector issues, she said of the Rs. 7,472 crore business last year, the organised sector contributed about Rs. 7,024 crore and the unorganised sector Rs. 448 crore. Amway, HerbalLife, Oriflame, Tupperware and Avon are among the top direct selling brands in the country.

She said Bengaluru topped the cities in terms of overall business, followed by Delhi, Ludhiana and Mumbai. However, Hyderabad continued to be in top 10 slot, but its overall position slipped from six to eight last year.

Referring to States such as Kerala, where direct selling companies have closed their business and also tough regulations in States like Andhra Pradesh and Telangana, she felt the Centre needed to take lead and come out with a comprehensive policy to regulate the direct selling industry, which has potential to grow by more than 10 per cent per annum over the next few years. It could further accelerate if the regulatory hurdles were sorted out, she felt.